The Role of Focal Therapy for ARUBA-Eligible Patients

Howard Riina, MD, Neurosurgeon at the New York University Langone Medical Center discusses the role of focal therapy—resection, endovascular embolization, stereotactic radiosurgery—for ARUBA-eligible patients, meaning that they have an unruptured arteriovenous malformation. He begins by mentioning that A Randomized Trial of Unruptured Brain Arteriovenous Malformations (ARUBA), which asked the question: “Is medical management alone superior to medical management with intervention for unruptured brain AVMs?”, affected the way these patients are treated. He then provides an overview of the trial, the controversy surrounding it, and its conclusions. He then relates focal therapy to the treatment of unruptured AVMs and states his conclusions. 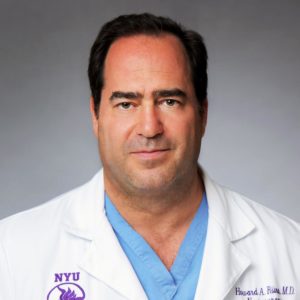 First of all, I'd like to thank Stefan Vilsmeier, and BrainLab, and the Institute for Medical Education for allowing me to speak. And I'll talk to you a little bit about the role of focal therapy in ARUBA. My disclosures are listed there, none really that pertain to this presentation, though I'm not a radiosurgeon. So I get to work with Doug Kondziolka. So I think that will make up for my lack of knowledge about radiosurgery and AVMs. And obviously, focal therapy, as we know, involves resection, endovascular embolization, and stereotactic radiosurgery in ARUBA-eligible patients, basically unruptured AVMs. I...