Value of SRS Over Conventional Fractionation for Bone Metastases

Yoshiya Yamada, MD, Radiation Oncologist at Memorial Sloan Kettering Cancer Center in New York City discusses radiosurgery (SRS) versus conventional fractionated radiotherapy for spinal and bone metastases. He begins by discussing histologic classification in terms of radiosensitivity and radioresistance and how that applies to spinal metastases before giving an overview of the results of several related studies. 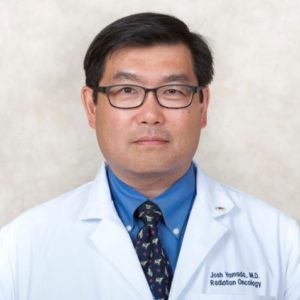 He is part of the multidisciplinary spine oncology service at Memorial Sloan Kettering cancer center. He has published and lectured widely on many aspects of spine SBRT and SRS.

He completed his residency training in radiation oncology at Princess Margaret hospital at the university of Toronto and completed a brachytherapy fellowship at MSKCC.

He and his wife, Susy, have 5 children. He is also an avid fly fisherman.

All right. Good afternoon, and welcome to the Novalis Circle Symposium. We're gonna be talking about clinical and technical innovations in spine radiosurgery treatment. And I'm very honored to be part of the program. And I've been asked to get this going. I think all of you have the agenda. We'll follow the agenda as much as possible and I think we really have some great topics here and some, I think, really interesting speakers. So it's a real honor to be part of this. My name is Josh Yamada. I'm a radiation oncologist at Memorial Sloan Kettering Cancer Center...